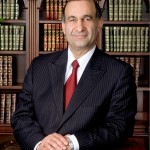 Mr. Mohammad Mohanna Was born in Tehran in 1950 to a prominent Iranian family. In 1969, he moved to the United States to pursue educational and economic opportunities. With a succession of odd jobs, he worked his way through college earning a Bachelor of Science degree in civil engineering. Today he is one of the largest holders of commercial and residential real estate in the Sacramento area and a major force in the revitalization of downtown Sacramento.

His civic mindedness is large and varied. Mr. Mohanna is one the first immigrants to serve on the prestigious Board of Trustees of the University of California at Davis. As a firm believer of dialogue among nations, he led a delegation consisting of the Chancellor and several other top ranking individuals from UC Davis to Iran in 2004. The trip fostered academic alliances between institutions in Iran and the United States and thus represented one of the most significant efforts of people to people relations between the two nations since the Iranian revolution.

Mr. Mohanna is an international philanthropist. He serves on the Board of Directors of the International Center for Religion and Diplomacy, and he is a regular guest at National Prayer Breakfast in Washington D.C.

He has been an advocate of poor and disadvantaged for more than 20 years in Sacramento. He has co-founded several non-profit organizations that provide services to homeless individuals such as Clean and Sober, Women’s Empowerment (awarded as the best non-profit organization of Sacramento in 2009) and others. He is currently undertaking to establish a transitional housing shelter for homeless single women at Loaves and Fishes Campus, a facility donated by the Mohanna Foundation.